We were recently called to evaluate a problem with the Fiber Optics broadband services at a gated neighborhood in Naples, Fl. The job presented several unique challenges. 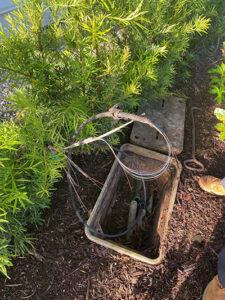 We had service in one building and no service in the next building which was several hundred feet away. There was no tracer line in the Fiber Optics cable which made locating the cut challenging.

First we attempted to insert a metal fish tape into the conduit and tried tracing it that way. We traced it all the way to the edge of a road where the locate stopped but there was no vault. We commenced searching the area for any vaults that we could find and we came upon the damaged cable in the picture. After repairing the damaged cable the broadband issue was still there.

So we realized there had to be a vault that was buried near where we lost our locate. So our techs broke out the shovels and started digging. 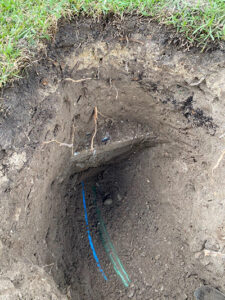 After the techs did quite a bit of digging we finally discovered the buried Fiber Optics vault buried about 3 feet under the surface. Schultz has seen this happen several times before so we had an idea what we were looking for.

To repair the problem, we dug out the vault, raised it to the surface and pulled the Fiber up with it. We placed a new piece of Fiber through the conduit and the broadband troubles were fixed. The customer was extremely pleased and we were happy to finally provide a long term solution to the neighborhoods broadband problems.

Many other companies would have given up after they found that there was not a tracer in the cable or even after being unable to locate the buried vault. Schultz Low Voltage Systems will go above and beyond for any of your neighborhoods needs involving Fiber Optics installation and Repair in Naples Florida and beyond, call today to get a free quote.